There’s something to be said for cycling as a way of seeing a place, particularly if 98% of the ride is downhill.  In Bali, where annual average minimum temperatures sit around 20ºC and maximums around 30ºC, most of the day long or half day long bicycle rides are downhill. And you’ll appreciate it. The pace is mostly gentle, the wind is in your face and you have time to see the smiles on peoples’ dials as you click by…

The journey kicked off from Gunung Batur, a still active volcano.  From there – with the exception of one or two up-hills – it was down, down, down to Ubud or somewhere close by. A lot of it was gentle coasting with the odd rush down a more dramatic slope.  With a sub teen girl and early teen girl in tow, both with tastes for acceleration and the rush of downhill wind, what else can you expect?

From Gunung Batur, a still active volcano, with the exception of one or two up-hills, it was down, down, down to Ubud or somewhere close by.

In the meantime, there was time to take in the views: vistas to weep over, a spectacular chilli bush with a cloth positioned to catch the fruit, spices drying on spread-out tarpaulins… Children waved, even though they’d probably seen a dozen other bike riders whiz by not half an hour ago, and you took time to stop and just look.

The ride from Gunung Batur back down into Ubud is one of the most popular options for a cycling day (or shorter) trip. Other trips are available but this writer did the Batur journey (twice), and loved it. Both rides were in the dry season — cannot comment on what it may be like to ride in a torrent of equatorial rain. Could be lovely.

Cycling tours can be arranged through your hotel’s or resort’s concierge but you can also book a ride yourself through a number of companies such as Sobek, Bali Bike and others. Prices for a 2.5 to 6 or so hour ride range (as of April 2015) from about $US 35 to about $US 55 per adult, depending on where you are picked up and the company you use. Many people choose to favour a local company – these are often cheaper.

Whoever you go with, check that they offer travel insurance to cover you and that there is an accompanying vehicle. This acts as a tail end Charlie, for safety’s sake. Many of the companies also offer a rider guide and will add features such as rice paddy tours or trips into temples or parks. A popular excursion is the one into the Elephant Safari Park – but this bicycle tour is a little more expensive at $US 69 per adult (April 2015 price).

Breakfast/morning tea or lunch may or may not be provided, depending on who you are with and how much you paid. Check on inclusions.

It’s a good idea to pack a soft fabric hat that will sit on your head below the bike helmet and to wear runners. If going short sleeved wear sun screen – even though much of the ride is through shaded pathways and roads you will probably encounter a hot sun. 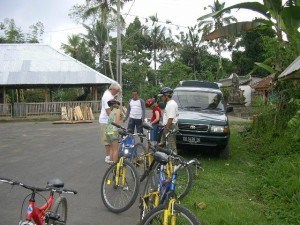 Stops can be frequent… and why not; take your time. Enjoy. Photo courtesy of L. Kimber.

It’s a good idea to pack a soft fabric hat that will sit on your head below the bike helmet and to wear runners. If going short sleeved wear sun screen – even though much of the ride is through shaded pathways and roads you will probably encounter a hot sun. ‘Bule’ burn quickly.  Dress comfortably in shorts and a T shirt or something similar. And don’t forget to pack curiosity, good humour and an ability to relax, because that’s essentially what you will be doing. 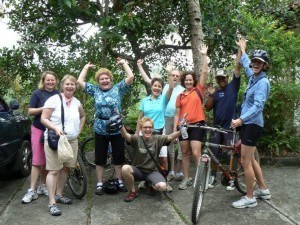 A hallelujah chorus at the end of the ride. Photo courtesy of L. Kimber

This site uses Akismet to reduce spam. Learn how your comment data is processed.